The North Eastern Brazilian region of Pernambuco is the home of various powerful musical expressions: maracatu, ijexa, côco, cavalo marinho, ciranda… Most of them are deeply rooted in ancestral African musical traditions, but have also been influenced by Brazilian Indigenous and Europe. Movimientos welcome Brazilian female percussionist Simone Sou and Mariana Pinho (Maracatudo Mafua) into the SOAS Radio studio to break down a selection of some of those essential roots rhythms.

LISTEN TO THE PODCAST HERE !

Over the last 20 years, those ancestral rhythms have been spread out to the world and are now played by dozens of bands and blocos all over Europe. Amongst them is Maracatudo Mafua, a London-based maracatu band formed in 2009. Mafua was initially created as a “stage professional band” but soon also started to give percussions and dance courses. After one year, Mariana Pinho, the band founder and artistic director, decided “to align all the educational bookings and courses to culminate in a big parade: Notting Hill Carnival”.

Each year for Notting Hill Carnival, the Maracatudo Mafua bloco goes down to the street to share with the public the strength and enthusiasm of those authentic rhythms. Last year, about 70 drummers and dancers from all over the world took part in the parade, among them were 14 musicians from Pernambuco, including Mestre Santino and Coco de Praia. As dance also represents an essential aspect of Pernambuco carnivals, Mariana Pinho makes a point of designing colourful costumes truly representing the carnival spirit of Recife and Olinda : this year she is customising used prom and gown dresses and giving them “a second and far more glamorous life”. 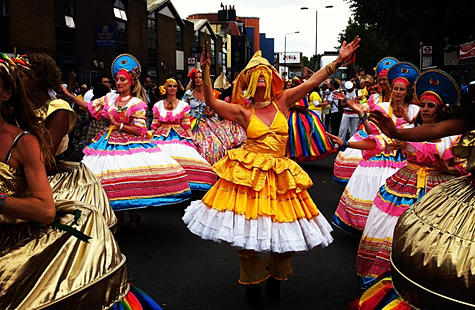 Unlike the bloco -which represents the traditional, popular aspect of Maracatu performed in the street- Maracatudo Mafua stage band mixes maracatu percussions with other instruments: for the gigs of this season they are 7 in the band. Rebeca Vallim and Sally Chop on vocals, Carinya Sharples, Mariana Pinho and Adriano Adewale on percussion, Ramon Fernandez on guitar and percussion (…) plus a more than special guest: Simone Sou.“We have had horn instruments before and we have a special flavour with the sweet tropical guitar played by Ramon that gives a twist of Ecuador into Mafua.”

This summer, Mafua stage band will perform for a very special pre carnival night, along with Simone Sou and Oleg Fateev and the singer and song-writer Aleh Ferreira, and Movimientos DJs on the decks, at Floripa on 22nd August . You can find further information on that event HERE.

The bloco will perform on Sunday 25th August at Notting Hill Carnival. To help them covering some of the costs of a Notting Hill Carnival parade – such as costumes ( for use only), insurance, tutors and assistants fees for rehearsals and Parade, purchase and hire of music instruments, etc. – , Maracatudo Mafua has set up a crowd funding campaign. If you want to help the bloco to go down to the street this year with their colourful costumes and powerful songs and rhythms, you can get a ticket for the pre-carnival night, buy a T-Shirt or pledge into the crowd funding campaign !

By: Léa Granados, special thanks to Mariana Pinho and Simone Sou